One of the more successful and humble eCommerce Rockstars I have ever met in my life is known best as the Founder of Snow – the leading teeth whitening system in the world. At just 26 years old, Joshua Elizetxe has the maturity and success behind him that someone decades older could dream to achieve. Endorsements and partnerships for this project range from Floyd Mayweather to Rob Gronkowski and a seemingly endless flow of support and credibility behind this proprietary product.

Before dominating the dental care space with this brand, Josh was substantially successful in the digital marketing and affiliate marketing space. He originally wanted to be a doctor as a kid, but then started to pick up undeniable skills with computers and the internet. He taught himself how to use sound engineering for his friends, then learned to code websites (prior to WordPress). He then stacked on creative and design skills so that he could make all of his creations look really great and easy to use.

The significant developments came as he started to master SEO so that he could be generating an income from AdWords and ranking his blogs. From there it was a natural transition to affiliate marketing, where instead of getting paid for clicks, he could get paid for sales which opened up significant new doors to making cash online

At a certain point, he came to a crossroads: he knew he no longer wanted to be a doctor, but instead, to keep diving deeper into this world he was now so enthralled by. He cut a deal with his parents that as long as he graduated with good grades, he could keep up with internet marketing and shelf med school.  He graduated at the top of his class, and neither he nor his parents could likely conceive just how successful he would become.

Josh decided to launch Snow after he hit massive success in internet marketing, bringing in millions of dollars in his early 20’s. What he came to realize was money alone wasn’t something that was going to make him happy, and that he had his head down for too long focused on what would become a dead end.

What he attributes this to is a kind of scarcity mindset, whereby if you don’t milk a business or an opportunity (or even a day in your life) for everything it has then you might lose out on that or end up with less in the end. I can certainly relate to this. He also fell victim to shiny object syndrome quite often, whereby his focus would always be moving to the “next big thing”.

He created a checklist that would serve as a compass for the future opportunities he wanted to peruse equipped with this new understanding. He wanted to create something he could talk about for the rest of his life and get tattooed on his face he loved it so much. He knew it had a to be a massive market, very competitive and challenging and would keep him engaged for a very long time. He also wanted to focus on the B2C space because of the massive base of potential customers… Quite ironically in order to avoid burnout.

Even after making this checklist and going through these criteria, he still had thousands of options. He had some pretty significant success with beauty products and really love the industry. After being shaped by having jaw surgery as a kid, he realized that there was a gap in the market between strips in the store and dental treatments for whitening.

Josh also points to the fact that it takes around the same time to build a million dollar brand as it does a $100M brand. You also get to play in multiple niches, it’s very familiar and very comfortable to do the smaller builds. But if you want to take a company from 0-$5bn, you have to be all in, it has to consume your passion and focus entirely.

There are a lot of talented marketers that are really getting into the mindset of building brands instead of chasing cash, but I hear a lot of them being unsure of just what to dive into with both feet.  Josh has many words of encouragement for these folks and uses the analogy of hunting rabbits vs hunting elephants (with an apology to vegans).

When you hunt rabbits it is really exciting, there are a lot of them, and they run really fast. But you have to hunt a lot of them to get enough meat to survive, and there aren’t a lot of other hunters who are going to want to join you. On the other hand, being tactical and hunting the elephants feeds a whole tribe, and you can mobilize that tribe who also all want to get behind a hunt like that.

That all being said, it’s important that you have all your bases covered and you have some cash flow which will allow you to be happy now, finance the future, and dig in for the big victory. After a while, though you need to decide where you want to be, and start to make moves to head there to leave the kind of legacy you want to leave.

Josh doesn’t take a salary from Snow. He is all-in for the long game and was able to finance this kind of runway by putting his head down on earlier ventures.   He advises that you take an honest look at exactly what your business would look like at 50x the revenue that is doing now: what does the team look like, office look like, products, etc, and reverse engineer everything from there. If you aren’t full excited about this, you might be more suited for a lifestyle business still.

When you get to the level of being absolutely all-in, everything changes for you. He said he no longer cares or gets excited about the idea of buying a new car or vacation or watch, he wants to work on the brand and invest in where it’s going. He gets excited by landing a new celebrity partner or working on the website or a big deal for the company. When you have this much passion for something you really fall in love with the game of business.  Also important is you shouldn’t just drop everything you are doing right now to build a big brand unless you really want to do it and feel ready.

This creates some massive shifts in your life not only in terms of where you place your focus but also the way you show up for other people. When you are in the “build something massive” mode people are just generally attracted to you and the purpose and passion that you exude (which was one of the things that drew me to Josh when I first met him). You also act as a massive beacon for attracting talent that really wants to work on meaningful projects and will relocate to be a part of something big.  Your job as an entrepreneur is to live in the future, and extract that vision and reverse engineer it for the team so that all the pieces can be put together for greatness.

Josh is aligned with so many of us in knowing that it takes a really special team in order to achieve something big, and having that giant vision and communicating it properly is paramount or attracting those A-Players who want to be a part of something very special.

Snow is perhaps best known for its multiple, massive celebrity and influencer endorsements with Floyd Mayweather and Rob Gronkowski both being shareholders and partners in the business. Josh is quick to note though that the most important influencers in the beginning and throughout the life of your business are your existing customers and the story that they tell their friends.  At the heart of their business is a great product and a great business, and that is the foundation for any business. Influencers are merely an amplification and brand positioning tool.

The motivation for any deal that Snow does with an influencer or celebrity is always the long term impact on the brand itself and building undeniable credibility.  The influencer must also be someone who trusts and believes in the product itself and is a great match in the eyes of their audience as someone who would actually use the product and represent it.

He has a brilliant analogy for how these two complementary components fit together which are pebbles and boulders being thrown into a pond. Your customers are pebbles and when you motivate them properly will tiny waves as the skip across the surface, touching other pebbles in the process.  If you’ve got a great product and empower people to talk about it then your business will always be making more and more ripples. The influencers are like rocks and celebrities like boulders, where they put out massive waves to touch many more people, but also to encourage those who are already customers to see it is alright to post about your product, and most importantly, to consume it.

There are really three phases/levels of influencer marketing that you can use symbiotically. Starting with micro-level and customers, moving to internet influencers (like Amanda Cerney) and then moving into true A-Listers like George Clooney.  All of the ROI is within the customer and micro-influencer level. Someone like George Clooney doesn’t even need to have much of a following, you are using them as a very familiar and trusted face to bring the brand equity all the way to the first level to your customers who can then build trust in what you do.

On a personal level, Josh had some great tips for people to get more done and be more productive and creative. He is a big believer that good rest and prioritizing sleep is extremely important and has been a key to his success and ability to recharge and keep going.  As someone who travels constantly, he also loves to sit down and brain dump everything he is working on during plane rides. Lastly, he will take a night each week and encapsulate himself at his office at home and just research new ideas, new opportunities, new influencers, market trends and more to stimulate great ideas for the week.

Josh also takes a night or two every week to also go out and have great meals and drinks with great friends. Being social and really enjoying himself in those moments with friends brings him back to why he is doing it, and occasionally ends up bringing in some pretty incredible deals just being out and hanging out with other entrepreneurs.

I think if there is anyone who deserves a good night out, it is definitely this absolute Rockstar of a human being. You rock Josh!

13:16 – The checklist that created the brand 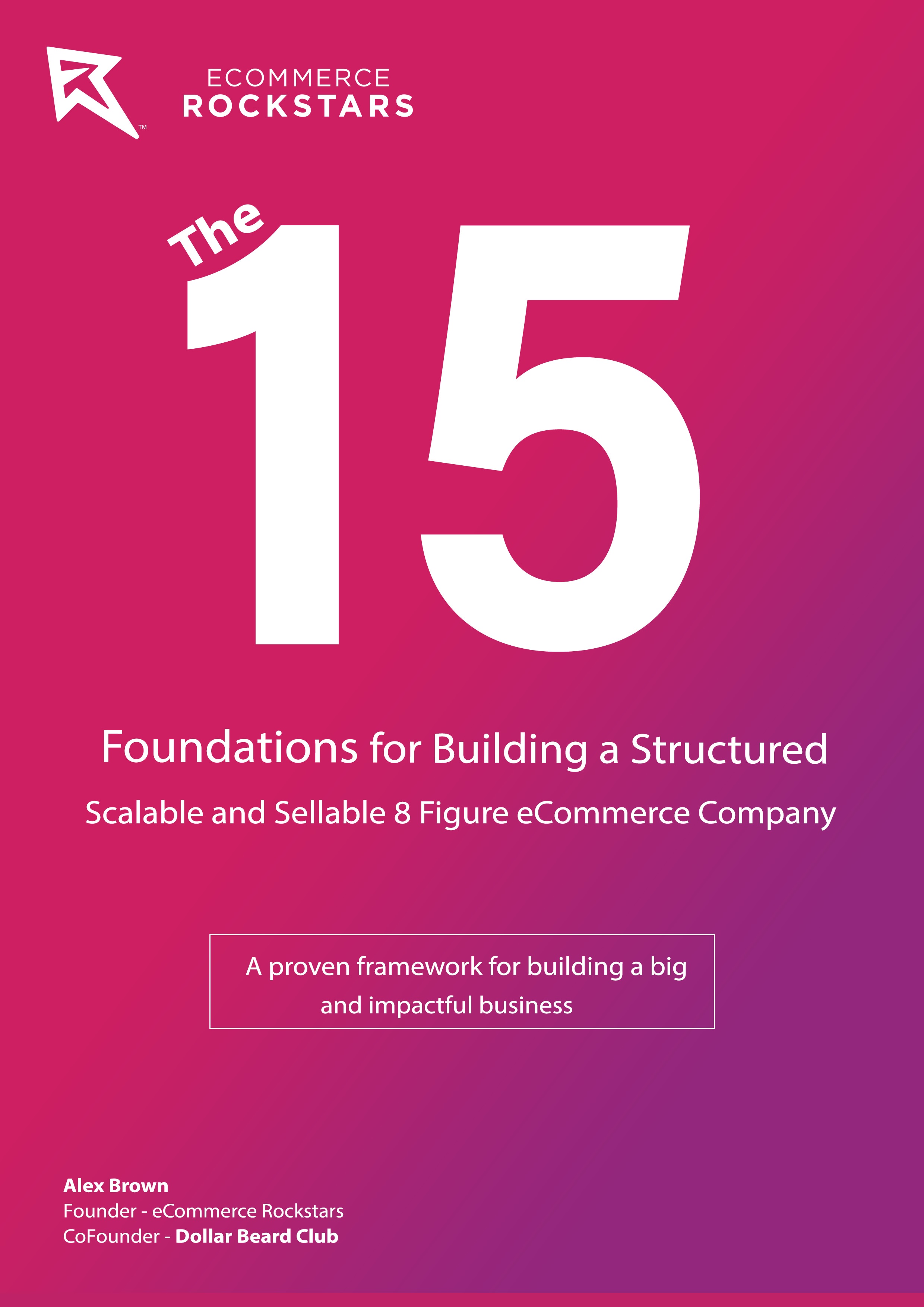